Ostomachion, a game that was very popular in antiquity. Made out of wood, both for kids and adults!

The word comes from the words bone and battle and it means the battle of the bones. The game was very popular in antiquity and it resembles today’s tangram. It used to be played by 14 geometric shapes (bones) forming a square. One form of play to which classical texts attest is the creation (through rearrangement of the pieces) of different objects, animals, plants etc. Another suggestion is that it exercised and developed memory skills in the young since two or more players made several geometric figures and competed with each other.

Did you know?
Ostomachion, also known as loculus Archimedius (Archimedes’ box in Latin) is a mathematical treatise attributed to Archimedes. It is also this puzzle game, similar to tangrams. It is not known which is older, Archimedes geometrical investigation of the figure, or the game!

Information/
Created in Greece
The game comes in a wooden box

Material/
Made out of oak and mdf

A creative studio specializing in custom made furniture and design items Three artists and one designer, Effie Papaioannou, Ira Spagadorou, Yannis Kapellos & Yorgos Louverdis have decided to join forces under the same roof, where they spend their time: -Designing and creating from scratch custom made furniture. Wood is our primary material but far from the only one. -Upcycling of old furniture and readymade objects, varying from a beautiful but worn out old chair that you may find in the trash to grandpa’s ashtrays. -Small editions of objects for every day use in your personal business or homely space. 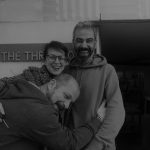 Be the first to review “The Three Dots / Ostomachion, wooden puzzle” Cancel reply